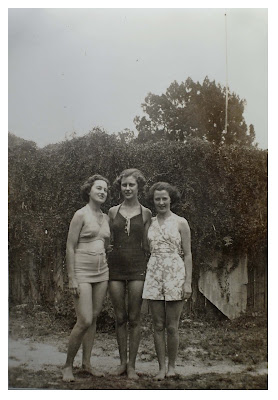 I will not attempt to translate a cohesive story of "The Intuitionists" for the simple reason that one does not exist. It will remain a board game with missing pieces. What I know about 'The Intuitionists' is a combination of the details passed on to me by my aunt together with Enid Baker's diaries, a collection of her poems, a series of postcard collage works and a number of photographs. The diary entries are a combination of Enid's poetry and brief reflections of the groups meetings. A letter from her sister Amy also makes a fleeting comment to "those days of The Intuitionists". The name is first recorded in Enid's diary the day after a conversation with one of the future members of the group Florence Armstrong.

Friday May 3rd.1929...Last night Florence and I discussed the idea of forming a group of women artists and poets. I suggested the name "The Intuitionists"...after all we are women and it is intuition that remains our life raft.There is also something in the name that locates me back to my days in Hanover and the dada recitals, so unexpected, strange and fabulous.Our style will be intuitive and spontaneous.I feel as though the only way I am to continue writing is to form a group of like minded people with the possibility of discussing all things artistic.

The first formal gathering of the group took place on Sunday 9th June 1929. Beneath the title written in a formal Copperplate hand in Enid's diary are the names of all seven women artisans who called themselves "The Intuitionists", they were, Enid Baker, Elsie Baker, Florence Armstrong, Ettie McCabe, Vera Goodman, Olive Ayers and Georgina Olsen.
.

My aunt first met Enid  in Toowoomba in the late 1960's at one of the art society gatherings when she was in her eighties.According to my aunt she had a reputation as a writer and poet but was someone that kept very much to herself. The impression she made on my aunt was someone who was not so much shy or over sensitive but very humble and perceptive. The brief case now in my possession was given to her a week before Enid left for Melbourne to live with her sister. My aunt said that they had only ever had a handful of conversations at different gatherings but Enid had invited her to visit before leaving for Melbourne. It was only during this one visit that Enid talked about the group of women artists and poets she had once been a part of. My aunt has never understood just why she had given the brief case to her. Although Enid would have known that my aunt painted and perhaps it was that creative spirit she felt a connection with. Perhaps it was simply a relinquishing of  a vignette of her past life.

To me it seems that Enid belonged to that generation whose life time senses gathered and carried the vestiges of two horrific world wars so the giving away of, the tearing and the burning of personal histories could very well have been a way of letting go...a relinquishing of the burden of the past..at least an attempt to erase memories of their own marginal vignettes of history...unfortunately what they did not realise is that this giving away, the tearing or the burning of their own historicity brought about an absence of what the photograph as an object of memory is able to provide for all generations that follow....what they leave in the wake of their acts of non-memory is in fact no wake at all...no trace...I know this because my fathers mother, my grandmother destroyed photographs of my father of whom I have only 3 months of memory...or non-memory.

I imagine the groups gatherings filled a creative void in the life and times of living in Brisbane during the early 1930's and although there is a sense that "The Intuitionists" as a group simply provided a covert audience for each others creative talents they interest me even more for their self contained existence.
I hope to find more to write of them..sp.
Posted by glen skien
Email ThisBlogThis!Share to TwitterShare to FacebookShare to Pinterest