A visit to a Sunday morning market...a mix of cheap fresh produce and bric a brac...the junk market contained within a golf driving range which I have never been able to decipher if it has been abandoned or if it simply surrenders itself each Sunday morning to trash and treasure... at times I stop to follow the suspended cage like netting that surrounds everyone...I often wonder if anyone else notices just where they are...for $2 I bought a collection of photographs of military planes printed on cards in a box set...I usually avoid anything connected to the military...I'm not certain why...perhaps because I associate such things with people who find some kind of glory in all things connected to war...perhaps I really think that all of this needs to be forgotten...so why buy them?...although there were colour photographs it was the images in black and white that triggered some deeper response...something that went directly to 'the reflective' moment...Barthes purity of the black and white photograph...the resurrection of the past... the war plane as human photographic portrait...then there was the women who was selling them...a woman perhaps in her early seventies who seemed somewhat detached from what I imagined was her one off experience of 'getting rid of stuff'......her stall a mix of house hold items,crockery,a small collection of souvenir spoons, toys...an assortment of tools...there was a sadness about her that made me think of who these cards once belonged to...then I bought them...sp 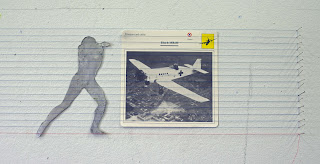