'Biography'...I have hesitated before writing about these works...perhaps at 3am my thoughts are still surfacing...or perhaps there is little to say about them...the umbrella image was of course one of the very first etchings i made after arriving here in brisbane...the first umbrella i had owned...at one stage i had titled it
"the existential umbrella"...and on its own it remains that...but it soon formed a relationship with a series of spangled drongoes...which some people still mistake for crows...and so the umbrella found its own place...it was really the thing that brought me to Merleau-Ponty...i will write more of its connection to my research but what interests me is the relationship which exists between image and text...in particular hand written text...i would have preferred to have presented my mva thesis written in long hand...just like these pages...it is the closest thing, the most direct moment of thought and language meeting...mistakes included...i don't recall how these variations of the umbrella etching made their way into the pages of my research journal...it remains as collage...and collage comes with its own self-contained meanings..sp 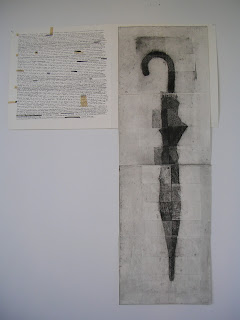 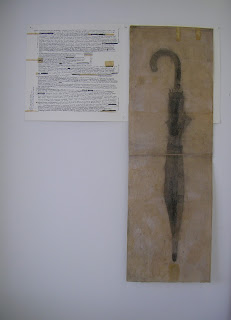 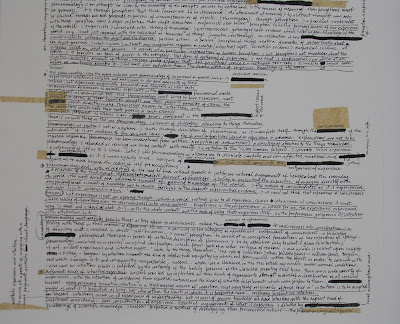