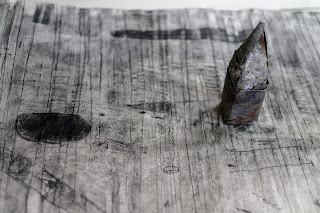 The base that these small, primitively crafted shapes are sitting on are a series of dry-point etchings that will form a series of artists' books...they have evolved with a sense of complete uncertainty that has often been closer to painting than making prints...the laying down of line /texture/tone...its erasure...extending original motifs...additional variations of line and surface...more erasure...at times thinking they should be abandoned...but always recognizing the unexpected....the residues of surface that maintained my curiosity...I am thinking of this because I seem to have arrived at a point where 'things' have come together with the playful appearance of these miniature iron  dwellings...perhaps it is still early days....but my reason for reflecting on this is that it all continues to rely upon the surrendering of one-self to process...I'm aware of the somewhat repetitive voice I have on the idea that all the reason/meaning that you will ever need is made available in the simple act of' making'...but to have arrived at a point of possibility with these works after such uncertainty, with such vague intentions to begin with, continues to surprise me...(to be continued)...perhaps...sp 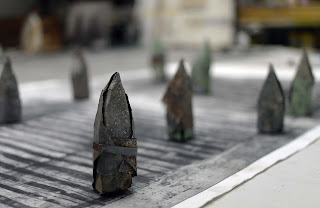 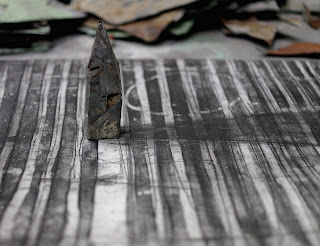